I first heard about Gene Shepherd on the Yahoo Rughookers Group, and soon began faithfully reading his daily blog. I became a member of his Internet Rug Camp when it began last January, and  in addition to the daily posts, I now have access to a growing number of videos on many aspects of rughooking. His work embodies the direction I am striving for in my hooking, and I have learned a great deal from him. 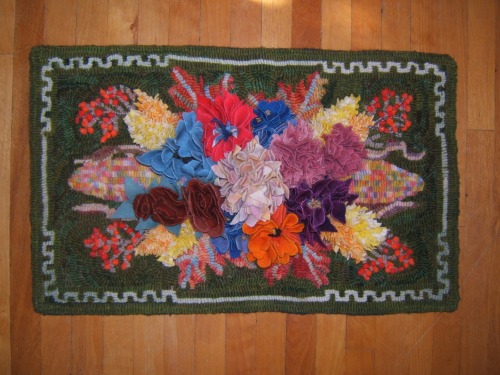 For Christmas last year I asked for Gene’s newest book, which is on ‘proddy’. I had admired this 3 dimensional form, but had never ventured to try it. This fall centre piece is featured on the cover, and the pattern and directions for the various flowers are included in the book. It was an excellent introduction to creating a wide variety of proddy flowers…. a workshop in a book!  Creating the wool for the corn was an interesting experience, unlike anything I had tried before- (adding the dye to the wet wool while it was laying out on a table), as was hooking it with increasingly long loops in the centre to create the cob-shape.

It had a place of honour in the centre of my Thanksgiving table this year.