As we all know, wool in the piece can look much different when it’s hooked. I’d already discarded one set of colours for the cottage, but when I started hooking with the light beige for the body of the cottage, it took on quite a pinkish cast, and I didn’t like it. Then I tried an off white, which was too stark, and finally settled on a pale yellow which I finally like. I’m sure someone with more colour expertise could have avoided these stumbles, but for me it’s trial and error until I like the result. 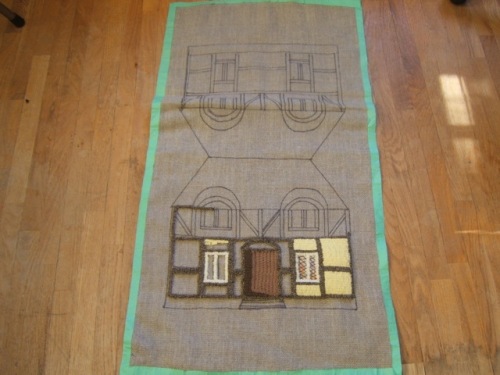 I’ll just back up for a moment…to a prehooking incident, which was a learning experience for me.  Normally when transferring a pattern, I would start with the edges, and outline in the ditches to make sure it’s straight. Then I pin the fabric to the straight lines on my ‘tintest’ backing board, and carry on. This time I didn’t want to bother with hauling out the big board for such a tiny piece (besides the living/dining room is decorated for Christmas), so I tried to do it just on the kitchen table. I never realized before just how much stretch there is in the linen, and was perplexed when the lines of the pattern were way off kilter with the base lines on the linen. I solved the problem by drawing the outside vertical and horizontal lines of the cottage directly on the linen using the ditches, then pinning the pattern to these lines. I think I have a straight pattern now.

The close up picture shows two ‘special effects’. Both are hooked from the back.I’ve seen this done before, but it’s the first time I’ve tried it. The window panes are just hooked normally, except from the wrong side (gives depth), then I did the ‘lead glass effect” using a double strand of heavy black thread. The door is done in “barn board stitch” again hooked on the wrong side…the pattern being…hook 1 skip 3 (sounds like a knitting instruction!)

One of the reasons I so enjoy hooking, is that it satisfies my lack of patience…I can jump around, trying the special effects doing bits of this and that…unlike knitting…where if I must knit 5,000 rows of stocking stitch before the fun stuff, I’m stuck with it! I can’t wait to try some of the flowers and vines….they are hooked on top of the existing hooking…I’ve been studying the pictures in the magazine, plus the instructions…this will be totally new for me. I think I may have to go down to a 3 or 4 cut for them.