I think I have pretty well completed drawing the pattern on the red dot. whew! 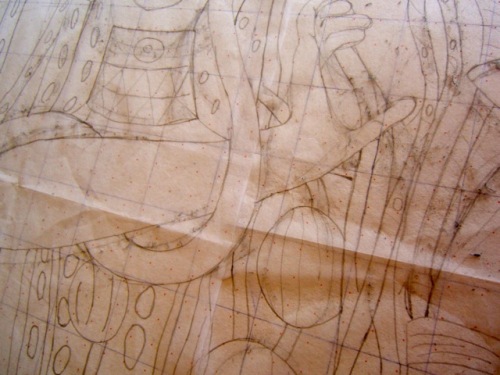 WHile doing some research for this project, I found quite a number of pictures depicting Glimt’s Hygieia. I chose the version I did for drawing…mostly because it was the largest I could find, its dimensions worked well for the grid drawing, and the one whose colour scheme I liked best (particularly the background)….

What dumb reasoning!! I so often get smart in hindsight! That version had a smokey, impressionistic bent, which made it very difficult to distinguish many of the details, and I was getting lost as I got down to the finer points!

One of the other versions is much sharper in its outlines, and more in the style I’ll be able to achieve using wool strips instead of paint. So…with all the major elements in place, I switched to this picture, and Oh how much easier it was to complete the details.

I’ve been debating about the colours and how best to dye them. I think I’ll start with  lazy swatches done with my new red colour , pro chem poppy red, and see how it turns out. I don’t have a huge stash, and don’t want to ‘waste’ a lot of wool with testing, so I’ll dye it over 1/3 yard Dorr natural . I watched Gene’s video again to refresh my memory, and it really was quick and easy.

If I like it, it’s easy to multiply up for bigger pieces. 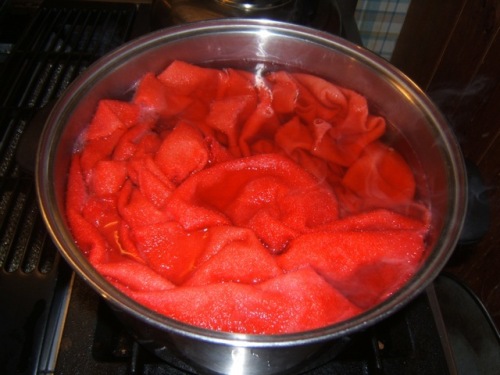 The pieces were added to the simmering pot at 35 second intervals. Then simmered for 1 hour. (Only swished as I put them in so it would be mottled) 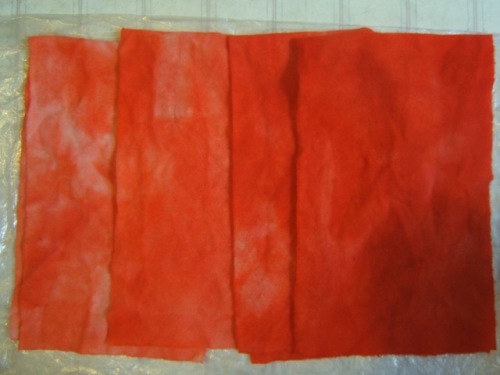 It’s very pretty but I’m not sure it’s the colour I want…seems very ‘orangy’, so I’ll likely try another combination. I’ll wait till its dry to make that decision.