Adele has been getting a bit of tweaking………again.

Two areas of the face still bothered me…and I’d been staring at them for a number of days. Wednesday, I got down to business and changed them. 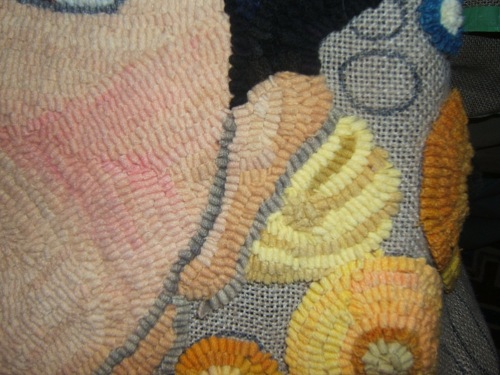 The first was her ear. I started by adding a line of the shadow colour between the edge of the ear, and the striped yellow ball. Before it looked like she had a growth attached to it! I was also disturbed by the ear itself. The straight lines didn’t follow the normal ear contour.

I pulled some strips right out, and some back a loop or two, and reworked the top edges, following what I thought was a more lifelike shape. 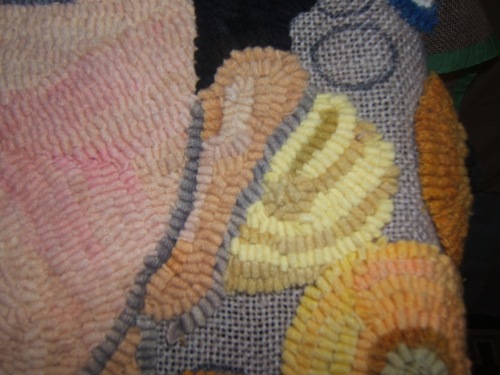 There….better!…although now that I think about it…I think I’ve got it backwards…perhaps the outside should be light, and the inside dark….ummmm…I’ll look at it awhile. 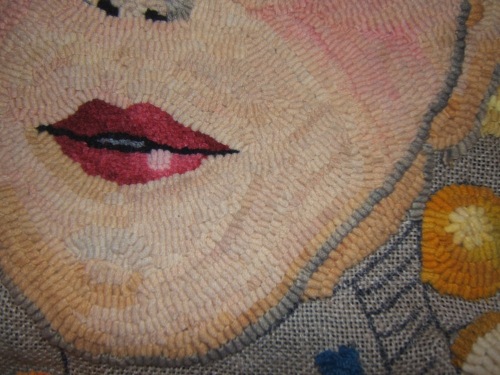 Then, there was a line of slightly darker wool along the side of her chin, that also seemed to ‘stick out’ . 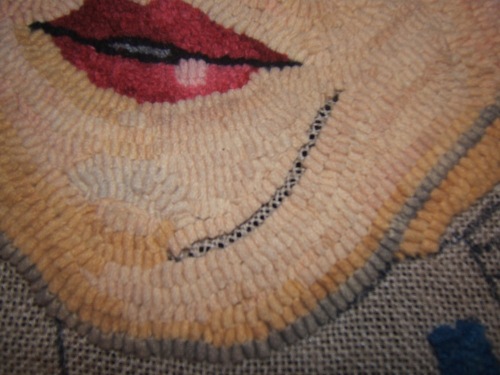 Because I have essentially used up all the flesh colour, I was trying to figure out a place where I could ‘switch strips’ i.e. where the slightly darker strip would blend in and release a lighter one for use.

Then I remembered that I had a wee bit left over from the chest area. I dug it out, and used it to fill in the space. It is actually a little too light….but I’ll look at it for awhile and see how it sits with me.

If you’ve been following Adele’s progress, you’ll recall…I’ve had a dilemma about the ‘red’. i finally decided on a rich, dark wine red…not unlike the darkest lip colour.  It appears in the choker and in the section at the top left. I decided to make the larger rectangles a yellow gold, and just introduce very small bits of red in the top part,with the maple sugar colour from the top of her dress as a background there, and then use the odd small amount of red within a few circles.