At the Sunshine meeting Tuesday it was great to see how everyone was beginning their matrix rug. Quite a variety of patterns were chosen, and of course the best part for me was seeing all the  variety of colour palettes. Several people weren’t at the meeting Tuesday, who had attended the workshop, but I managed to take pictures of those who were there.There were three examples of the pattern “Aztec”. Jen stressed that it was important not to work on the pattern in such a way as to leave gaps that needed to be filled in….so those doing this pattern start in the middle and work outwards. 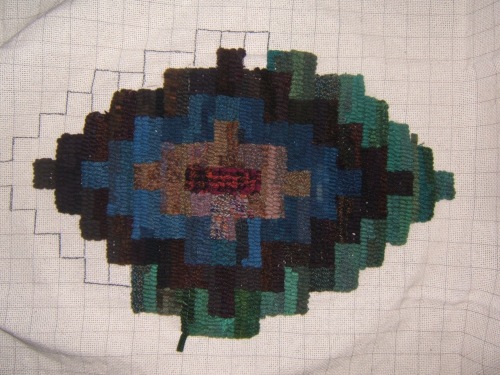 Pat found that by changing to a larger hook shank, it was easier on her wrist. i love her subtle dark pallette. 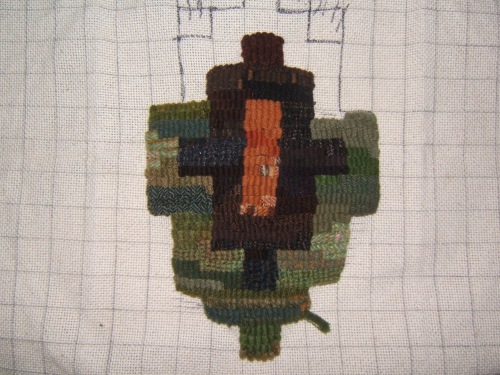 Jean wasn’t pleased with her centre block, but I can’t wait to see more of that colour  as she works outward…I think it will be striking . Love the fall colours.

Edie, Wendy, and Darlene chose the pattern “simple” which is all about squares.

Wendy wasn’t sure she was going to like the yellow square she was just starting.

Darlene chose a small mat and is nearly finished.

Diane is the only one doing this stair step style pattern called stripes. I think it will be quite dramatic.

Margaret and I are doing “zippers”

Margaret has a wonderful way with colours, and I can’t wait to see this as it develops. (It should certainly go with her red kettle don’t you think?) 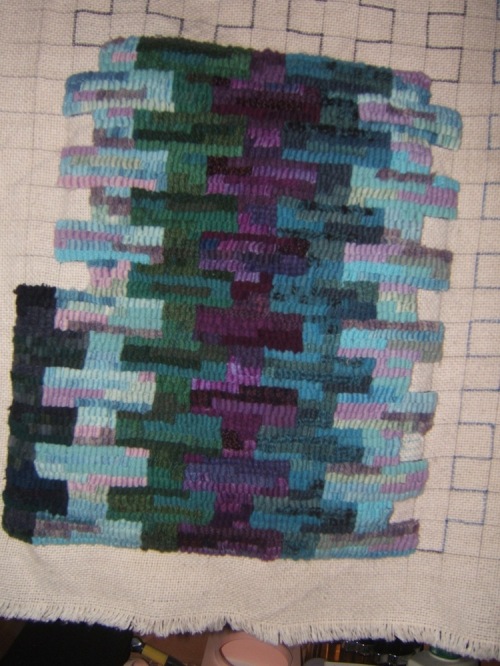 I’ve made a little more progress on mine. I originally thought one would establish the sequence of colours, and stick to it….but Jen suggests that you vary them (keeping both ends the same) ….so I’m mentally planning the colour sequences, so that the pale zipper is evenly placed throughout…I’ll do 5 of it…2 each side, plus the centre zipper. The question is….what order to use to fill in between…