I had hoped to finish hooking Matrix Zippers last night, but I ran out of steam. I had to cut more wool and that took longer to do than I realized it would. (I can only cut 2 strips at a time )…..but it is nearly done….just part of one zipper, and the ‘half zipper at the end ‘ to go. 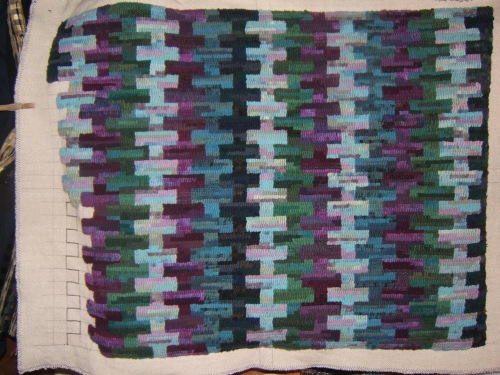 Today I have been once more having fun with the dye pot.  When I was at R.U.G. a couple of weeks ago, I picked up a camel hair coat that had been taken apart and over dyed grey.

I didn’t have any specific use for it in mind, but it was beautiful wool, very reasonable, and I knew it would eventually come in handy.

I’ve been trying to anticipate what wool I’d need while at Trent, and realized I’ll need a very dark outlining colour. I cut some of the camel hair in a 4 cut, and it cuts beautifully…so I set out to over dye some of it darker.  I was surprised at how unstable that grey dye was….when I soaked it….the water was black!

Actually rather than black to outline with, I want a very dark red…so I tried 1/4 tsp mahogany in 1 CBW, and added the grey wool and vinegar.

It wasn’t nearly as dark as I wanted it…so I over dyed that with 1/4 tsp navy in 1 CBW.

It really is lovely…a rich navy/purple. …just not the colour I need for this project. (it’s actually MUCH darker than the picture shows) 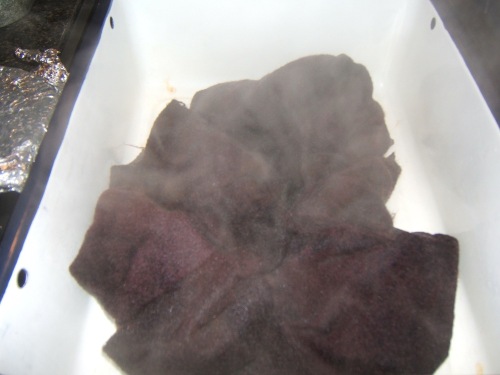 (I was being reckless since I had lots of the wool) I tried again with a different piece of grey. This time I used 1/4 tsp mahogany in 1CBW and 1/4 tsp black in 1 CBW….but I only added 1/2 cup of the black solution to the pot.

Finally…I think this will do the trick! (again…the reality is much darker than the picture)

The results on the line..( you can see here how dark they really are).I’ll have to bring them in before Ray starts the fire in the wood barbeque…finally a beautiful day and…..yummy hamburgers for dinner.