It just dawned on me…that one of the biggest changes I’ve made in my hooking style in the past year or so….has to do with colour/wool selection. Of course my stash has increased significantly…giving me more options, and my apprehension about dyeing my own wool has largely disappeared…so that is a big factor…BUT…

While I have a general idea of what I want when I start…(or maybe not)…I choose much of the wool as I go along… discarding what doesn’t work without a second thought.

I used to choose the wool…or have help choosing the colour palette….then hook it…and that was that. Now I ponder over each choice.

Rather than stressing about the background for Fat Cat…I’ve felt like I was ‘playing’ with options as I tried various wools and hooking styles that might work.

I tried a variety of options

The greys I originally chose were too blah, 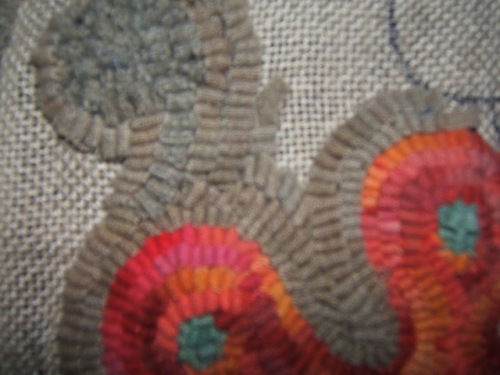 I overdyed some of them….and it was too dark 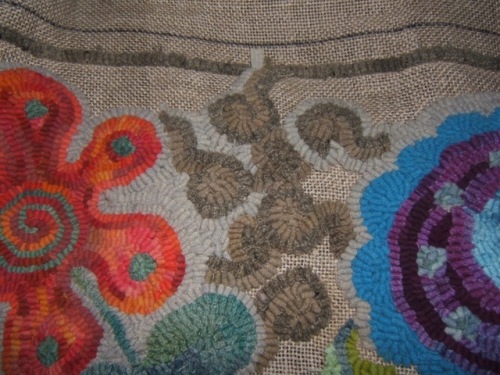 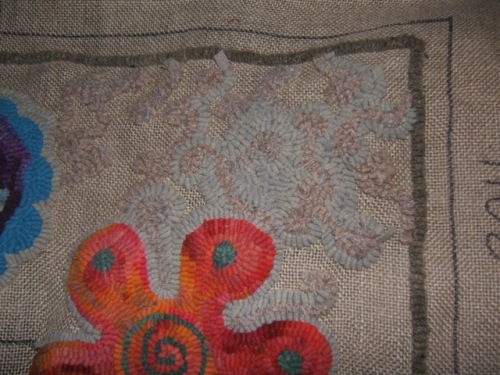 I like this combination best (it’s much better blended than in the photo)…the pale beige plaid and another light tan plaid I picked up recently…but it’s still pretty ho-hum! I still haven’t made a final decision

This is the 2nd version of the eyes. The first I did with black…and they were ugly….ugly…looked as if the cat would attack at any moment!

It took me a few days to get back to the dyeing…I needed darker wool for the points. I doubled the dip dye recipe, then added extra black…and dyed it over three textured wools…and after 3 tries…I was satisfied….so now I’ve started the body of the cat. I changed the eyes again….after looking at Akuma’s in a better light…when the pupils weren’t so large.

I was just reading someplace (I think it may have been Gene’s blog) about doing cat’s whiskers with a separate loose strand. I had some threads of linen backing which ravelled off the edge of Hygieia, so I used that to create some whiskers….just pulled a piece up in two places….and knotted it close to the hooking. I may put a dot of glue on them later to hold them in place, so they aren’t so helter skelter…but I like the effect.

I’m not trying to have any sort of realism here…but would like the fat cat to be recognizable as a seal point siamese.

3 thoughts on “Progress with Fat Cat”