Although I finished the hooking on my hall runner nearly a year ago, it had remained rolled up, unsteamed and unbound. I promised myself that after finishing the hooking on my footstool, I wouldn’t begin a new project until I did the finishing on some completed projects.

To that end, I hauled out the runner, and spent an afternoon steaming it. Then I was faced with the dilemma of where it could dry. The only space big enough where it would be out of the way is the living room, but it is currently under construction, and full of plaster dust.

I finally settled on hanging it over the banister from the upstairs balcony.

I knew the weight of it hanging over the stairs would soon pull it down, but my ever resourceful DH came to the rescue once again. 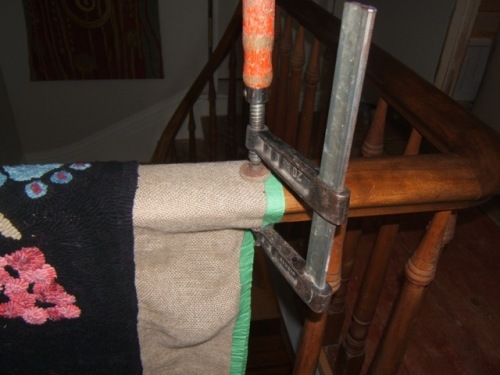 Ray clamped the linen edging to the railing to keep it in place, and we’ve been happily ducking under it as we go up and down the stairs. 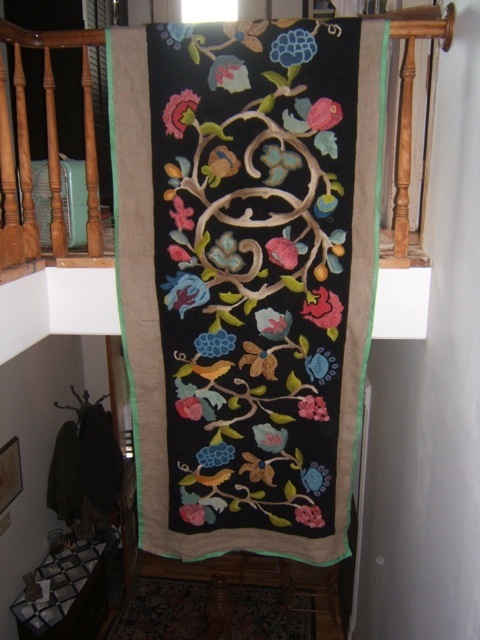 Next job is to zig zag around it twice with my fearsome, and single minded sewing machine.

I’m procrastinating about this, because I know I’ll have to do that most awful of jobs….refill the bobbin…..but first, the dog needs grooming….the baseboards aren’t all stripped……I need to make some broccoli soup….You see what I mean??? Anything to avoid sewing!

As with many problems, after setting it aside for a few days, then taking a fresh look at it…the solution to my uneven bottom bands turned out to be quite simple. The biggest “Aha” came when I realized the edges didn’t have to all have the same number of rows….they just had to have the same number as the section they would meet. So while I had to add stripes in a few cases, other sides were easiest to do by shorteneing the stripes and adding an extra row of banding just at the end. Because the bands were undulating anyway, a straight line wasn’t necessary.

This ‘before’ picture shows the right side with 5 bands, and the left with 8 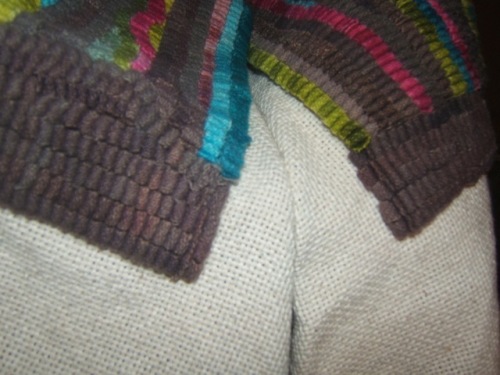 Here they now both have 5 bands.

These have 5 as well. 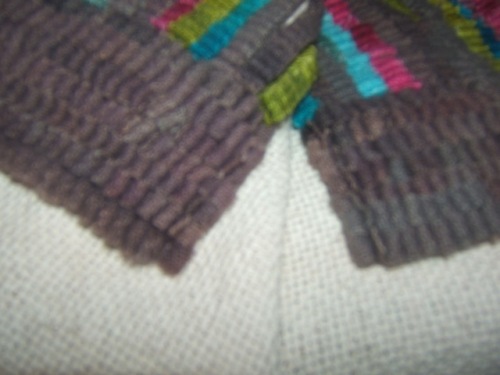 This pair have seven rows of hooking at the end.

Before beginning this process, I determined that the sides were even as they were, so the overall length didn’t need adjustment. I pinned each seam, and got a sneak preview of the cube effect. Next…sewing around the perimeter, and steaming….(…sigh…the dreaded sewing)

In the meantime….back to my fall trees…my stumbling block there, was trying to choose wool for ground cover so that it looked right and gave some perspective of the distance. All my original choices failed miserably…..too dark….too much colour.  These are the three plaids I ended up using. I am so bad at anticipating what they will look like when hooked….it’s still trial and error.

I remember Linda Wilson telling me, that the farther away, the lighter it should be…so I used the centre plaid at the horizon. and the left one closer up….with just touches of the green on the right for interest and colour.

So now….back to my barn. I’ve been looking at it hanging on the wall for a couple of months, and I’ve decided it’s too boring. There’s just a little hooking left to do, but I have some changes I want to do and additions of weeds and grasses in mind. Now just to decide how I’ll do them.

I happily completed the hooking on the footstool as it was drawn, then hung it up to look at it.

It was only after it was finished, and I was contemplating the sewing together, that I realized that when the sides came together,  the solid bottom border needed to match the number of rows in each section.

Yikes! Mine don’t match at all.

Extending the coloured stripes down further would be my preference to make each edge the same number of rows,but I don’t have the wool to do that, so…. my next option is to extend the bottom border upwards on the smaller ones.

That will be nip and tuck….and a royal pain 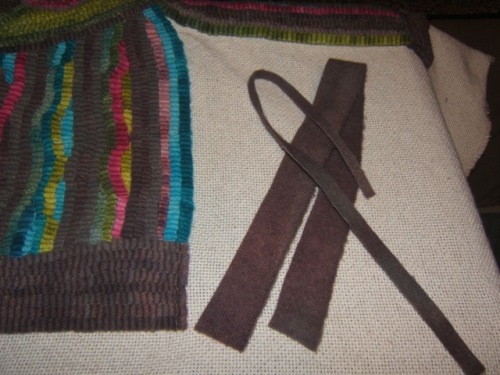 ….because I have hardly any wool left, and I’ll probably have to dye a few more pieces in order to have enough. I don’t mind dyeing substantial amounts, but I’m not so happy to dye a smidgeon.

When I have a major set back like this, I need to step back for a bit, and gain some perspective. Sooo….I began my fall swap mat.

That’s just an 8″ x 8″ endeavour, but I’ve been thinking about it for some time. I wanted to do fall trees, something I’ve never attempted before.

I looked up lots of pictures on google, and stared at the colours and composition . I found a few hooked examples and carefully studied them as well. 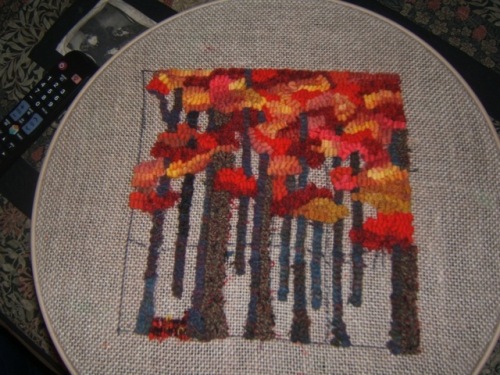 As it turns out, the trees were the easy part. I’m experimenting widely to try and get a ground cover that looks realistic, and implies the distance. 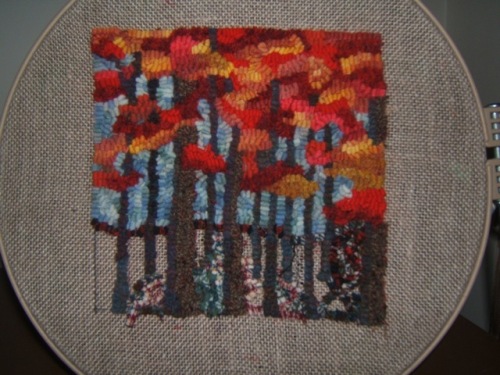 These are supposed to be a secret until sent to the recipient, but my swap mate hasn’t responded to several ‘hello’ emails, so I assume she doesn’t surf the net frequently ( or is away, or doesn’t check her email)…..so I decided to share how I deal with a problem…..do something else for awhile while I ponder a solution!

I’m not sure if the hooking on the footstool will last me until the end of the Olympics. There isn’t a great deal left to do.

I’ve just a little bit to finish on the stripes of the last side, then the bottom sections.

This is the first one I completed, and I haven’t yet fixed the bottom section so it doesn’t bend in. (Sorry Jen…..I’ll get to it ) 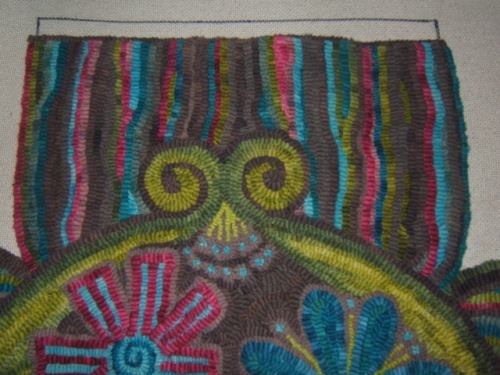 I used the same colours on each side, but made no effort to match one side to another. 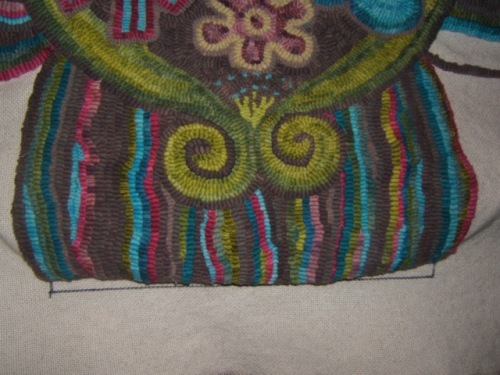 It has been a surprisingly slow process to choose the colour sequences, and make the wiggles change direction. 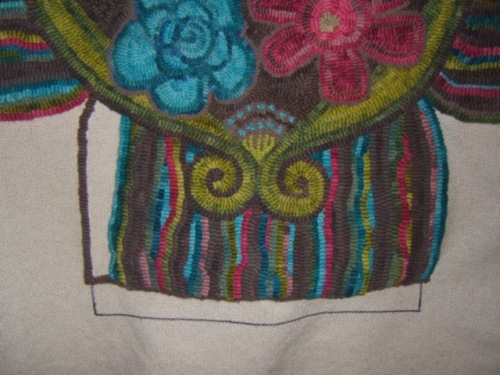 I’ve had to hunt for bits and pieces of some colours in this last section, and I’ll probably have to dye more of the mink brown/taupe to complete the bottom bands. Then the hard part…making it into a cube.  Fortunately Cindi Gay has wonderful step by step instructions on her website, including a material list for construction of the frame.

I’m looking forward to another grandchild visit this week…this time from one of my 19 year old twin grandsons. Somehow I doubt I’ll be able to convince him to attempt hooking…..giggle …giggle