As with many problems, after setting it aside for a few days, then taking a fresh look at it…the solution to my uneven bottom bands turned out to be quite simple. The biggest “Aha” came when I realized the edges didn’t have to all have the same number of rows….they just had to have the same number as the section they would meet. So while I had to add stripes in a few cases, other sides were easiest to do by shorteneing the stripes and adding an extra row of banding just at the end. Because the bands were undulating anyway, a straight line wasn’t necessary.

This ‘before’ picture shows the right side with 5 bands, and the left with 8

Here they now both have 5 bands.

These have 5 as well.

This pair have seven rows of hooking at the end.

Before beginning this process, I determined that the sides were even as they were, so the overall length didn’t need adjustment. I pinned each seam, and got a sneak preview of the cube effect. Next…sewing around the perimeter, and steaming….(…sigh…the dreaded sewing)

In the meantime….back to my fall trees…my stumbling block there, was trying to choose wool for ground cover so that it looked right and gave some perspective of the distance. All my original choices failed miserably…..too dark….too much colour.  These are the three plaids I ended up using. I am so bad at anticipating what they will look like when hooked….it’s still trial and error.

I remember Linda Wilson telling me, that the farther away, the lighter it should be…so I used the centre plaid at the horizon. and the left one closer up….with just touches of the green on the right for interest and colour.

So now….back to my barn. I’ve been looking at it hanging on the wall for a couple of months, and I’ve decided it’s too boring. There’s just a little hooking left to do, but I have some changes I want to do and additions of weeds and grasses in mind. Now just to decide how I’ll do them. 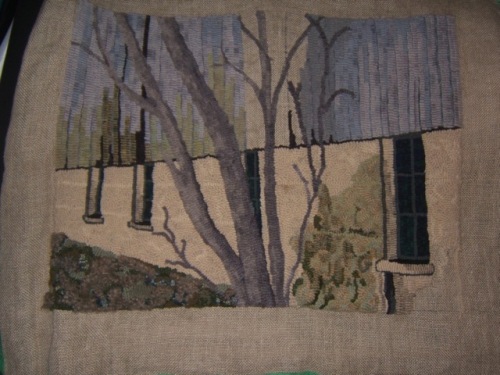 3 thoughts on “Fixing my Bottom”