Once again, it’s the first Tuesday of the month…Tribute Day at Sunshine Rughookers, and today was my day to tell my life story, and show my rugs. If you’ve been following this blog since I started it, you’ll have seen all these rugs at one time or another, but here they are again.

My first rug was given to me by my father in the 70’s. I had no idea about rughooking apart from what my father had seen demonstarted when he bought it. After a feeble beginning, it languished, barely begun, in a closet for about 30 years. It now lives over a rocking chair in my sister’s living room.

My second rug ( begun during my 2nd try at hooking in the mid 90’s) is Peonies from Rittermere Hurst Field. My sister kindly whipped it for me just this week, and I sewed down the binding last night….20 years in the making! It too found a home in a closet for many years.

Beginning my third, and final attempt at rug hooking in 2006 This is also a Rittermere pattern…Canadian Mosaic….a semi-oriental rug which features the wild flowers of all the Canadian provinces. I hooked this rug while watching the Tour de France. I was still hooking only with #3 and #4 cuts, and hadn’t yet begun to dye my own wool.

On a trip to Cape Breton in the early 90’s, I picked up this Deanne Fitzpatrick pattern, and attempted to do it in the Cheticamp style with yarn…..hated it….and it too spent years in the closet. I took it out and hooked it with strips in 2008

Another early, uncompleted rug..(finished many years later).This pattern was found in a girl friend’s closet,probably had belonged to her mother, and I believe it was from Eaton’s in the 1920’s. Not knowing any better, I hooked the old burlap, and it’s still holding up just fine. 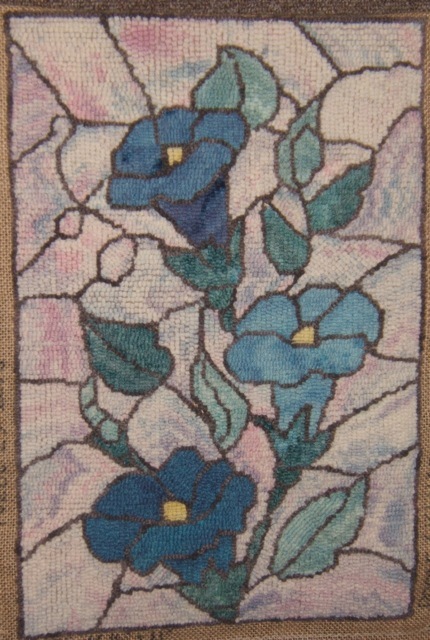 This stained glass pattern is from Sheila Klugescheid, and is someday destined to be framed.

I began hooking in earnest in 2008, and Women in Hats (another Deanne Fitzpatrick pattern) was my first effort after recouperating from heart surgery. I was not yet dyeing my wool at this point, and used what was available in my (then small) stash.

My name for this is Severn Sunset, although Sheila Klugescheid (it’s designer) calls it something else.There was a sandy section which I removed since there were no sand beaches in the area of the Severn where I spent so much time. I painted the dye on the wool  in the sky and water sections

Emma Sue came to life in a workshop with Anne Boisonnot. I always feel that this piece marked a turning point in my hooking ‘life’ . I dyed all the wool, and stepped out of my box with colour and texture. 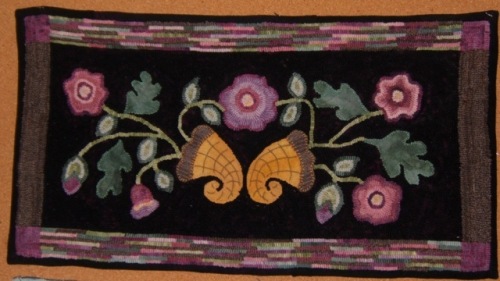 This is my non-penny penny rug. I did it in a workshop with Bea Grant, but decided I would rather hook than sew pennies, so my version is VERY unlike the others. I did do applique for the cornucopia and the leaves, but did a hit and miss border instead of pennies.

This will be  my table centre piece next weekend for Thanksgiving. It is the pattern in Gene Shepherd’s book on proddy.

This little bird was a free pattern in RHM and I hooked it with nylons. ….a great travelling project….I took it with me on a trip to see family in Regina…no cutter needed. 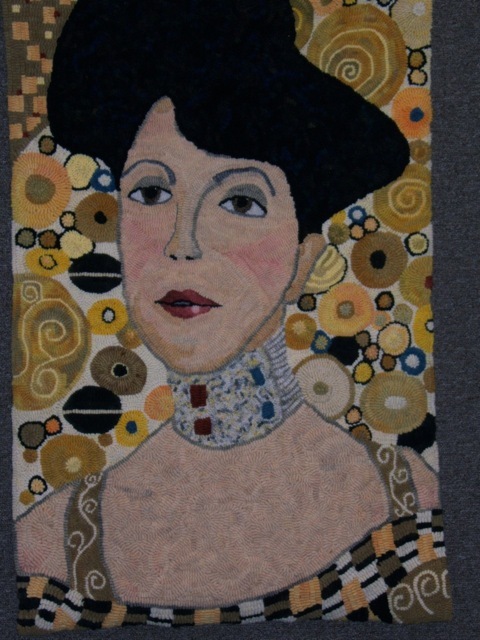 Adele is from my Klimt phase…..one which needs further exploration. I’m still fascinated by his work. 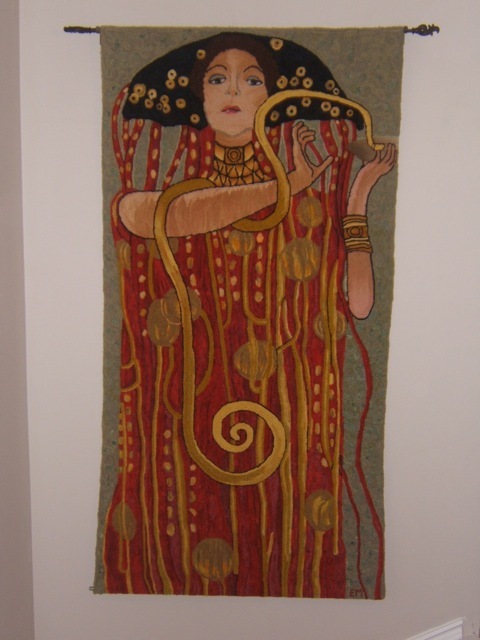 Hygieia, my other Klimt piece, now hangs in my stairwell. I’d
love to do another really large piece, but I only have one such spot in the house.

Fat Cat, a pattern by Heidi Kramer, is adapted to resemble my fat seal point Akuma. My first really whumsical piece, and I loved hooking it.

My two hall rugs were such fun to design and hook. I haven’t dared put them down on the floor yet though.

You can just see the un-upholstered footstool on the table …my latest piece. Ray has completed the box for it, the legs have been purchased, so now it’s up to me to get the foam padding and finish it.

Black and White adapted with permission from Dahlov Ipcar…I struggled so much with the background colours. That’s what drew me to her work in the first place, but I’m still not convinced about my choices. I reserve judgement until I have it up in my living room with the rugs on the floor which influenced the colour choices. Hopefully I’ll like it better then. 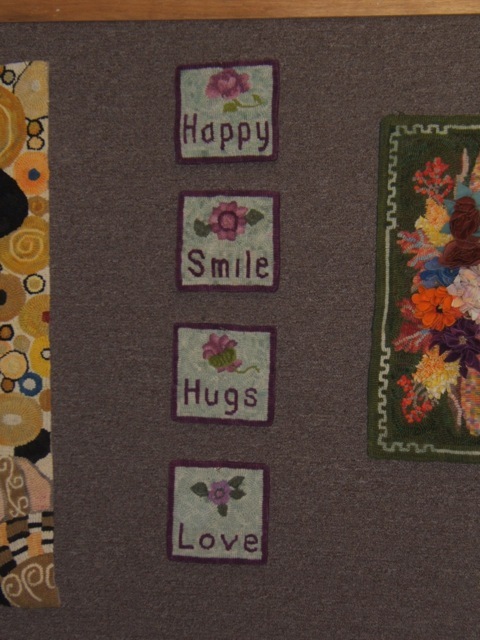 My one and only attempt thus far at lettering. I made these large coasters for my sister. 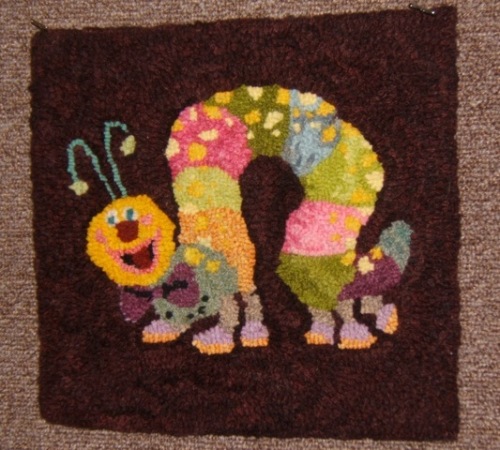 “Charlie” was the free pattern given out at this year’s annual in North Bay.

Ever helpful friends mounted many of the rugs on the two large bulletin boards in the room where we meet. It made them easy for everyone to see.

This is one half of the 2nd board….

….and the other half. I was actually surprised that I had so many rugs…most done in the past three years.

It was a fun experience, but I was really tired when I got home. It’s exhausting to talk about yourself for an hour!