After two tries (and failures) at reproducing the left over flesh tones I had used on Althea’s face, I thought I might have to take out the face and re-do the whole thing with a new colour. Sometimes I wonder at my own stupidity! I had only read the first part of the recipe I’d used originally, when in fact there were three steps needed  to get the  colour I was after.

So I took my two “failures” and overdyed them (as per my own instructions) with more pink sand and a bit of charcoal grey, and I had my flesh tones.

I was never impressed with her original chin line. I thought it was too prominent.

….so when I was redoing her nose, I reduced the chin line by one row of hooking.

When I started doing the neck, it still seemed too heavy , so I reduced it yet another row, and now I feel she has a more attractive chin . (I still intend to redo her nose and probably make adjustments to her left eye)

I’ve been thinking a lot lately about the style of hooking used for  filling, and the effects it can have on a piece. While the hooking of the facial features is directional, her neck and chest are hooked with squiggles to give the effect of an expanse of skin. 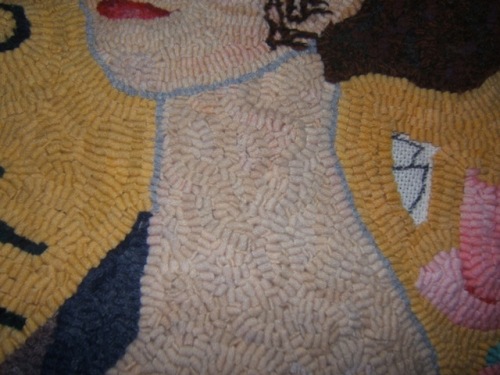 I wanted the background to both highlight the objects of the piece, and as well have some interest of its own. I was struck by the beautiful background on a tea cozy being hooked by Gene Shepherd, and used that as my inspiration. While Gene’s background was primarily one colour, he had created interest with occasional circular movement of the filling. I decided to use an echo backround ( hooking around the features outward) but emphasizing areas which had curves, by extending them much further than I would normally do for an echo filling.

I also eliminated a number of leaves and flowers since I felt certain areas were too cluttered. 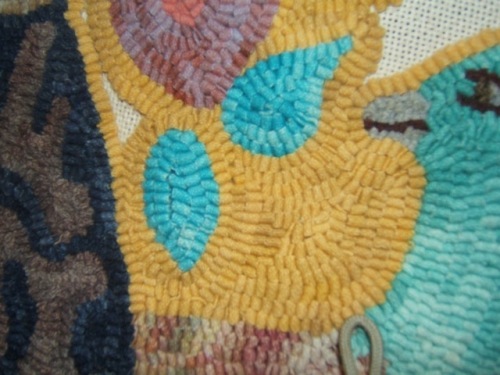 I’m hoping the overall effect will be pleasing to look at.

While this flower shows clearly against the background up close, it gets a bit lost when looked at from a distance. The values are too close, and I’m still pondering how I will address that…if at all. 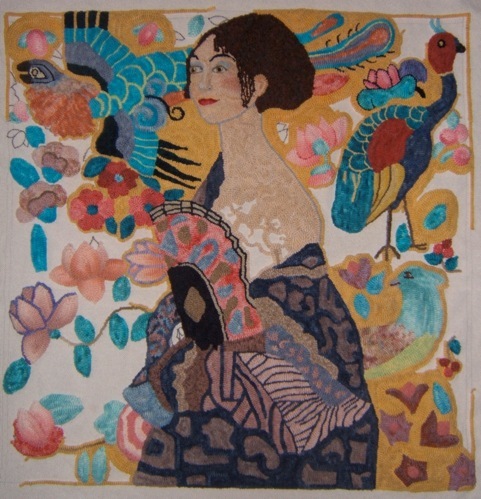 The blank areas are getting smaller and smaller, and the completion is in sight, but  I already have two new projects in mind so I am a happy hooker!

2 thoughts on “Filling and Fiddling”