When I went to the photo mat workshop two weeks ago, I had chosen two possible pictures to do. 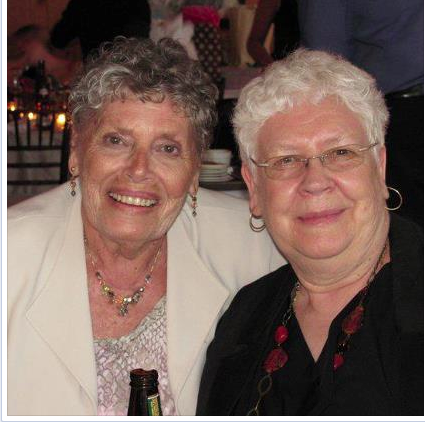 …this one….which I thought was probably the best photo, but the colours weren’t interesting. 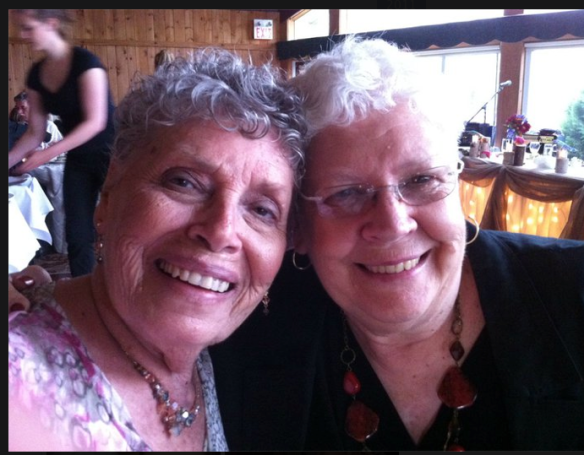 …and this one …which has better composition (Wendy told me that).

I decided on the second,…and got to work. I found it both rewarding and frustrating. …rewarding as I saw my sister’s face start to develop….and frustrating  trying to capture myself, and figure out how to do the background.

After trying different versions of the waitress in the upper left, I finally decided that the background bore no importance or interest in the photo and eliminated it altogether. Then came the dilemma of how to hook it.

I gathered a variety of colours, and draped them around the hooking, finally choosing to make a half frame with a small piece of dip dyed wool pink to grey, then filling in the rest. I tried the mottled pink first , but eventually took that out leaving it only as the outline around my head, and I used a spot dye and squiggles to fill in the rest.

….here is my first finished version. I like the background….not happy with my face…nose off centre, chin too broad and lopsided, eyes still too wide, (although at this point I’d already reduced them once)

So I spent Saturday evening reworking the eyes, lips, nose and chin. 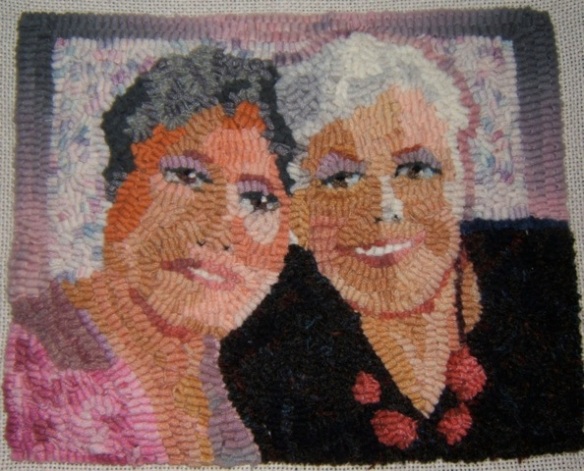 I extended the shadow above the right eye,  added a small strip below each eye to reduce the size, made the smile wider and the upper lip smaller, reworked the teeth, reduced the nose and centered it better, and trimmed down the chin. Did I mention that I reverse hooked the teeth? That way they sink into the mouth….a neat little trick. (not original of course….someone else at the course was reverse hooking for a special effect…I think it was Linda Wilson….and it suddenly dawned on me that it might be a great way to make the teeth more realistic…..sometimes it pays to snoop at what your neighbours are doing )

I’m still not thrilled with my face, but I think at this point it’s the best I can do with my present skills. I’m really interested in increasing my abilities in “wide” cut painterly style portraits. (well not exactly “wide” this is a 6 cut) …..and I’m looking forward to tackling another one.

HOWEVER….that’s not what I plan to do next. I’m preparing to venture into the world of primitives….for the first time.  I’ll tell you all about my plans in the next post.