After the summer, Sunshine Rug Hookers always meet for the first time on the day after Labour Day. We get off to a running start since the Rug and Quilt Fair is held on the 3rd Saturday of September at the Simcoe County Museum and there’s lots of preparation necessary.

It was great to see what everyone had been working on over the summer., or  starting as a fall project. 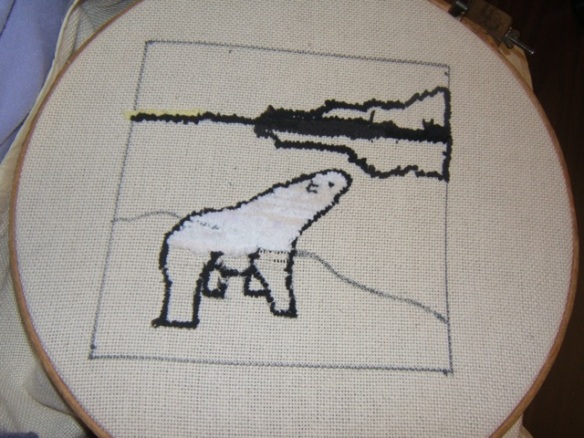 Someone had started hooking this polar bear with nylons and decided that nylons weren’t for them…..gave it to Luise…and she is now going to do her magic 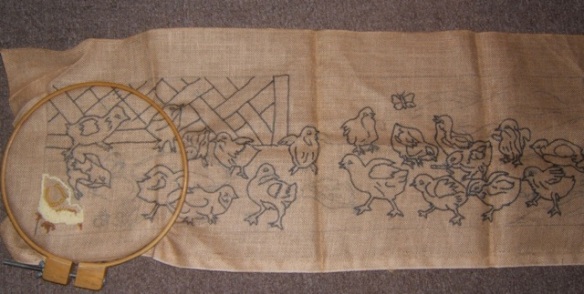 Edie is just beginning this piece called A Yard of Chicks.

Hilda continues with her project…..well into her 90’s and with very little sight, she is an inspiration for us all.

Jeanne’s project is applique rather than hooking. She is making a fall table centrepiece. This woman is a wizard with a needle and thread.

Jan is working on a Deanne Fitzpatrick pattern which she started while taking one of Deanne’s on-line courses. It’s called Poppies on the Edge of Town.

Mary  is working on  a pattern by Deanne’s sister. (what a talented family)

At first Teresa didn’t want me to take a photo of this, but she relented when I said what a good story it would make. She had watched the video of the Doris Eaton method of finishing, and liked it on the first rug she did it on. (black tape and a black background). After getting part way through this piece, she realized she didn’t like the white tape against the grey background, and is now deciding how to fix it…..the grey will come out, and it may end up all white, or at least white around the edges….final decision still to come…..learning point….the background and the tape need to match for the best results of this technique. (she points out that what she really should have done was dye the tape to match the background before applying it.)

Diane is making coasters to sell at the Quilt and rug Fair….but it looks more like wearable art here.

Kathy didn’t bring a hooking project, but in fact was doing the most important chore of the morning….preparing the sign-up sheet for coffee and goodies for the year. (We hookers need sweets and stimulation to keep going).

Helen has finished her unique memory rug of her Mom, which even includes the recipe for her Tomato Butter. 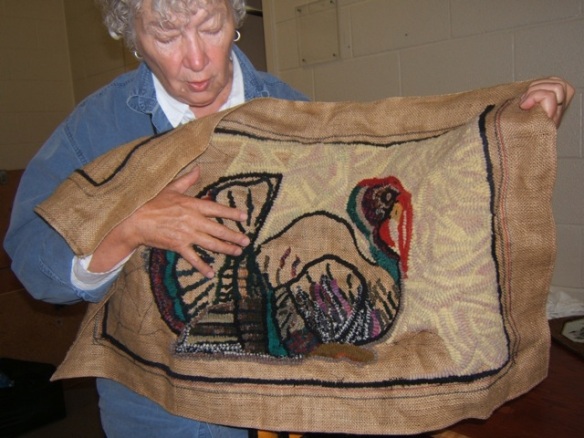 Ann says she’s getting to the end of her pile of unfinished projects. She had to make adjustments to her turkey when she realized that “she” was a “he”. Don’t you love that unique background.

Over the summer, Lynda completed this wonderful Sheila Klugescheid pattern. She hooked the sheep with wool which came directly from Scotland. The vertical hooking of the background is really effective . 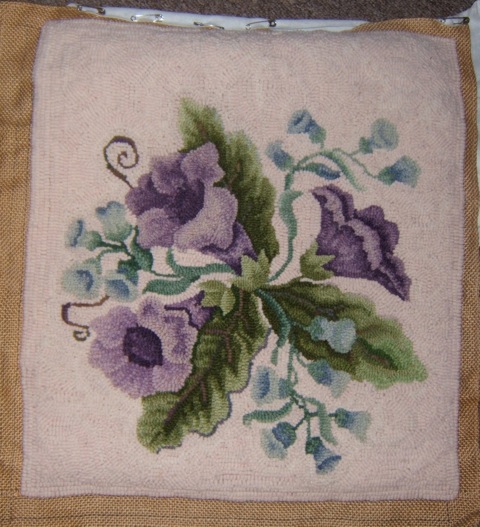 Jackie is finishing this inherited fine shading piece. She has a wonderful silk cording to go around the edge of the pillow.

Cynthia’s wonderful creativity runs in the family. Her sister sent her a box of “goodies” with a note saying use this to make something,,,,and “make something” she did! This amazing mixed media quilted hanging is a work of art….with applique, and hooking with wools, yarns, silks etc, and topped off with a binding made from beautiful fabric which had belonged to her late mother-in-law. Just wow! 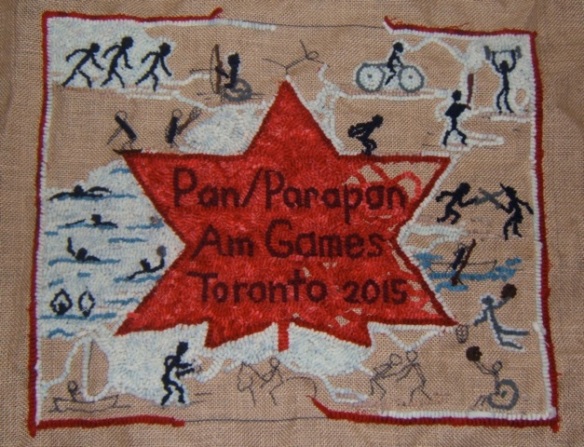 Linda’s Pan Am rug is really taking shape. I marvel at how her stick figures so accurately represent the various sports.

…and now to veer totally off topic….I want to share this monster with you. It grew unbidden and uninvited just in front of our compost box, and is rapidly taking over that corner of the yard. The compost box has completely disappeared. Ray and I have been eating yellow zuchinni nearly every night (I’ve been searching for different ways to cook it)……We’ve no idea how the seed(s) came to be there in the first place….I haven’t bought yellow zuchinni in years. Manna from heaven!