I’ve been gradually augmenting my supply of Pro Chem dyes, and I try to pick up a few more each time I’m at an event .

Golden Pear was one of my purchases at this year’s annual, and I’m oh so glad it was. It’s a rather dull greeny-yellow….certainly not something that would catch your eye, but it has turned out to be just the colour I visualized for the background of Signa Meus Vita.

Well that’s not exactly true.  What I thought would work was a pale yellow. I wasn’t sure how pale or how yellow, so I tried bits and pieces I had on hand, and held up swatches from Jewel Tones against the hooked parts. It soon became apparent that any kind of bright pale yellow wasn’t the look I was after, and I settled on a dull one….then thought it reminded me of “golden pear” and sure enough when I checked my “pro Chem ” swatch sheet, it was just right. Choosing a single colour over a recipe of several dyes is just a lot easier for me, as I add and spot dye in various amounts in the pot. Also while at the annual, I picked up an $8 grab bag of wool that turned out to be mostly pieces of various shades of off white or beige. I spot dyed these and about 1/2 yd of Dorr natural with a weak solution of golden pear ….about 1/8th tsp for the whole batch of (I’m guessing) about 1 1/2 yds ….. with 1/2 of the solution in the bath, and 1/2 spotted over the top later.

After trying several methods, I settled on using the palest to outline the symbols, and filled with  random darker pieces. 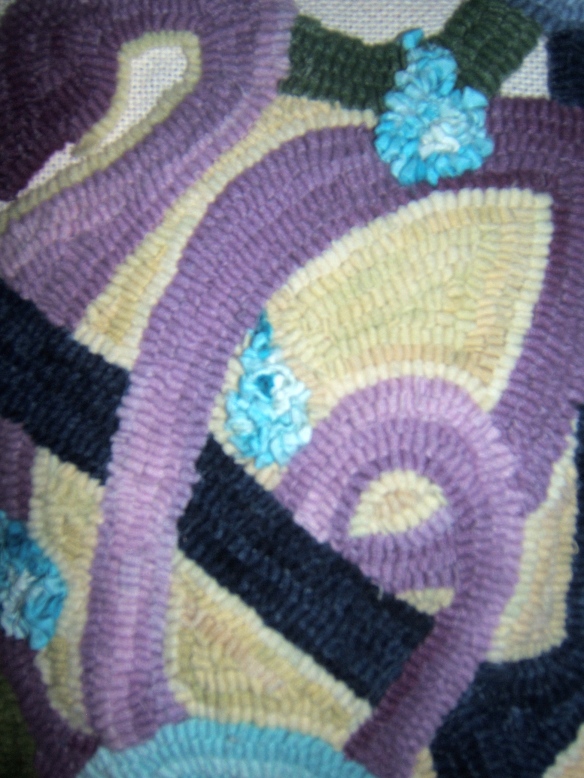 The pictures aren’t true to the colours, but hopefully give the idea of the effect. 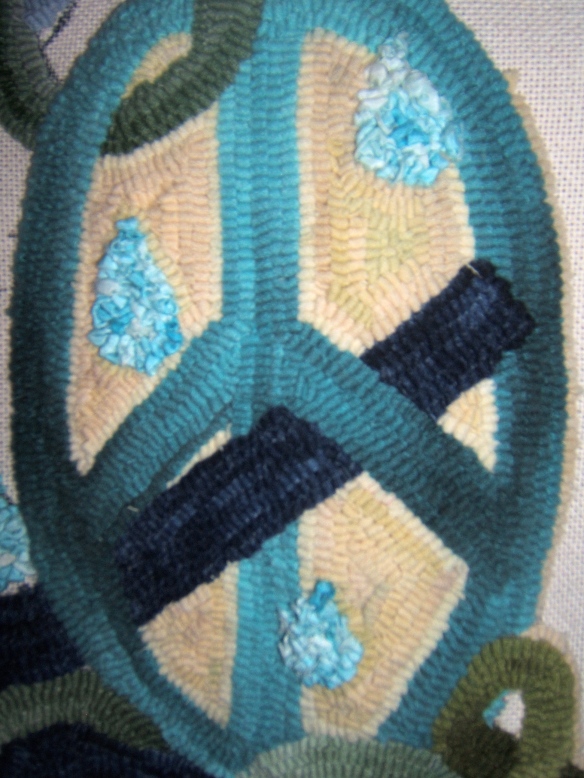 I’m having fun with it while I watch the Tour de France each day.  I still haven’t decided how I will do the outer parts of the background. ….always something to ponder.