At this year’s annual (which I wasn’t able to attend), an exciting new venture was launched which will involve all the OHCG groups.

TRAVELLING FRIENDSHIP RUG:
The Friendship Rug is designed by Debbie Ballard, measures 60”x72” and is being hooked throughout The Year of the Craft (2015) and commemorates The Fiftieth Anniversary of OHCG  2016.
Rug hookers are invited to hook their hands on the rug as it travels throughout Ontario, with its final destination being the 50th Annual conference at Deerhurst Inn in 2016. It has embarked on its journey beginning in Fort Frances and was at the conference in London. It has spent this week in Orillia, and at R.U.G. on Saturday it will be passed on to another group.

What a wonderful way for the rug hookers in Ontario to celebrate the Year of Craft….by combining efforts to create one large work of art…and how appropriate to have the topic be the 50th anniversary of OHCG (Ontario Hooking Craft Guild)….to be celebrated officially at next year’s annual.
During the past week, several of us completed hooking our hand, and at our meeting on Tuesday, a table was set up for others to do the same.

Mary and Rachael are working side by side..

Many in our group tend to the wild and imaginative. I don’t know who hooked them all, but Gail  M. hooked hers in her signature vibrant reds and scarlets, while Cheri has used her favourite acid greens. Karen hooked hers last week when it was so unseasonably cold, so her hand has striped mittens, while mine is in the foreground in orange and rust with sparkly gold nail polish.
Fort Francis, the only other group to complete theirs so far , have created beautiful, lifelike hands in true flesh tones.

Some folks at the annual drew and outlined their hand. 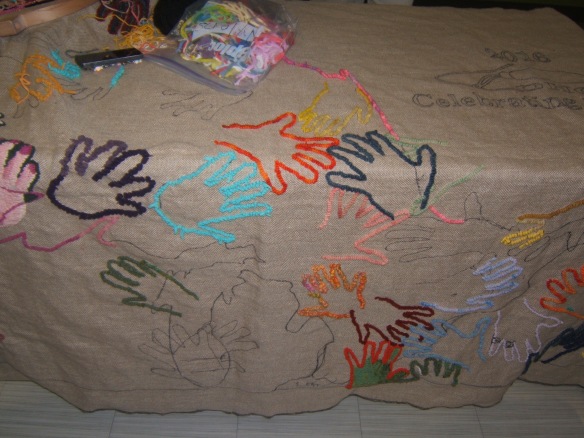 Some hands are complete….. 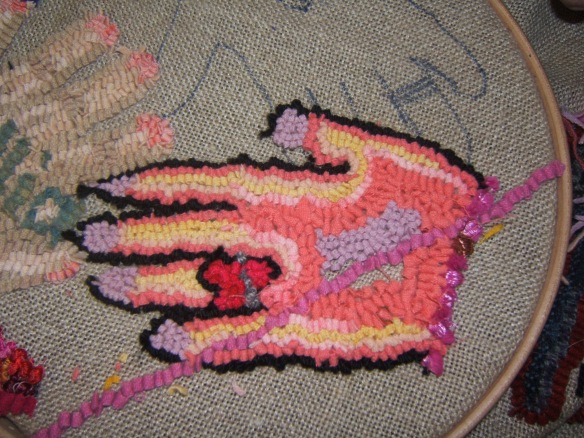 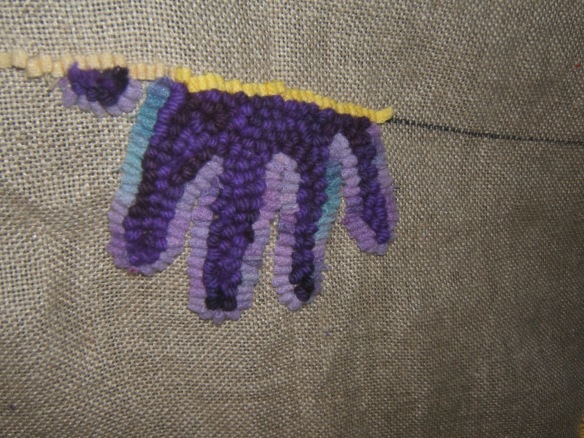 ….are grasping the edge.

It’s a large undertaking in more ways than one. … Look for it coming to an Ontario Guild near you.
I can’t wait to see the completed version next year in Huntsville.
Thanks for stopping by.