Mary Lou had a great Maud Lewis surprise to show us at R.U.G. on Saturday.

But I’m jumping the gun a bit. First for some background. For those not familiar with the name Maud Lewis….she might be described as the Grandma Moses of the Maritimes, undoubtedly Canada’s most famous folk artist. …and patterns of her paintings are very popular with rug hookers. 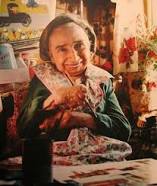 The Art Gallery of Nova Scotia has this information about her life….
“Early Years
Maud Lewis (1903-1970) was born to John and Agnes Dowley in South Ohio, Nova Scotia. As a child, Maud spent most of her time alone, mostly because she felt uncomfortable about her differences around the other children. She had been born with almost no chin and was always much smaller than everyone else. However, Maud seemed to be a happy child who enjoyed the time she spent with her parents and brother. Maud’s mother started her painting Christmas cards to sell and thus her career as an artist began.Her life and only experience of the world extended to an area between her birthplace in Yarmouth County and her married home in Marshalltown, Digby County. In 1935 Maud’s father died and in 1937, her mother followed. As was typical at the time, her brother inherited the family home. After living with her brother for a short while she moved to Digby to live with her aunt. There she met Everett Lewis, an itinerant fish peddler, and married him shortly after in 1938.Life in the House
Maud spent the rest of her life living with Everett in their house in Marshalltown. The two had what has been perceived as a formidable companionship, despite any character flaws neighbors found in Everett. Because of Maud’s worsening rheumatoid arthritis, she was unable to do housework. Everett took care of the house, and Maud brought in money through her paintings. The two were a pair that Maud was proud to be a part of.The home they lived in was tiny in stature but large in character. Despite the lack of modern amenities like indoor plumbing and electricity, the house shows that Maud’s life in Marshalltown was full of enjoyment through her art. Those who stopped after seeing her roadside sign, “Paintings for sale”, found a quiet woman with a delightful smile. Her pleasure didn’t come from the pride of having done a painting, but the creative act itself and the enjoyment others seemed to get from her work.Through newspaper and magazine articles, as well as television documentaries, Maud became well known and a reputation grew that’s still growing today.

The House
After the death of Maud Lewis in 1970, and subsequently of her husband, Everett Lewis, in 1979, the lovingly painted home began to deteriorate. In reaction, a group of concerned citizens from the Digby area started the Maud Lewis Painted House Society; their only goal was to save this valued landmark.

After a number of years of fundraising, the society realized that the project was going to take more resources than they could gather. In 1984, the house was sold to the Province of Nova Scotia and turned over to the care of Art Gallery of Nova Scotia.

In 1996, with funds from the federal Department of Canadian Heritage and from private individuals, the processes of conservation and restoration began. The final, fully restored house is on permanent display in Halifax at the Art Gallery of Nova Scotia.”

Well….Mary Lou Justason is the tireless director at large for RHMNA (Rug Hooking Museum of North America) , and as it turns out has been able to acquire five Maud Lewis paintings for the museum. Here is her story…..

“Last fall I talked by phone to Anne Phillips McCreary Juhasz, an elderly cousin of my husband, at her home in Chicago. She is a retired professor of education at Loyola University having started her teaching career in a one room schoolhouse in Ontario.
We spoke of her getting her affairs in order. After all, she is 93.
Among her treasures were five Maud Lewis paintings which she had purchased, while on vacation, in the late 40’s and directly from Maud Lewis, a little gnome of a lady, at her wee tiny house near Digby, Nova Scotia. When I told her about the Hooked Rug Museum of North America and suggested repatriating the paintings to them in Nova Scotia, she was interested.
Incidentally, she paid 25 cents for each painting.  They were chosen from a great stack of paintings accessed up a rickety ladder into a loft. Anne needed a flashlight to see what was up there. She got them framed simply but without glass and for a long time they were in her storage unit in her condo buildings
Over the winter and with many phone calls and letters bck and forth, we sorted out the details of getting them to me in Florida so I could transport them back to Canada.
Finally, with an early deadline, she or a trusted friend got them shipped to us in Florida and we brought them home to Honey Harbour.
They had a brief visit to RUG (Ruggers United Gathering) at the Simcoe County Museum, just outside Barrie, ON on Saturday where they were much appreciated.
They now have arrived in Nova Scotia and are with Suzanne Conrod.
They will be displayed there along with a donor plaque acknowledging Anne’s gift. They have had quite a journey and if they could talk, the tale would be much more interesting than I could ever spin, but I am happy they are back in Nova Scotia.”
….didn’t I say Mary Lou was a tireless ambassador for RHMNA…..
Well of course I was at R.U.G. and got to see them in person….and want to share them with you. 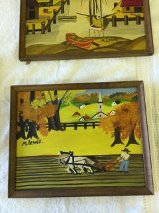 ( thanks to Marg Arland for sharing her photos)
It was such a treat to get to see them in person.
As I said…they are very popular subjects for hooking  and are sold by many vendors, particularly in the Maritimes.  (Please note that all works by Maud Lewis are copyright and the authority to license others to reproduce them rests solely with the Art Gallery of Nova Scotia.)   As it happens, Jean is working on a Maud Lewis piece right now….

The yoked oxen were a favourite subject and appear in many paintings…..Jean’s work is a spring time version. Maud Lewis’s wonderful clear colours and simple happy style make her work immediately recognizable and beloved…..as well as readily adapted to being hooked.
Thanks for stopping by.