Well, I’m personally not grumpy, (at least I don’t think so), but I’ve been busy trying to create grumpiness for my next project. I’ve talked about the pattern in earlier posts, but it’s been quite awhile, so I’ll start once again from the beginning.

I fell in love with it, and asked him if I could hook it. He sent me a photo of it by email . I had it enlarged,

then I transferred it to my backing. 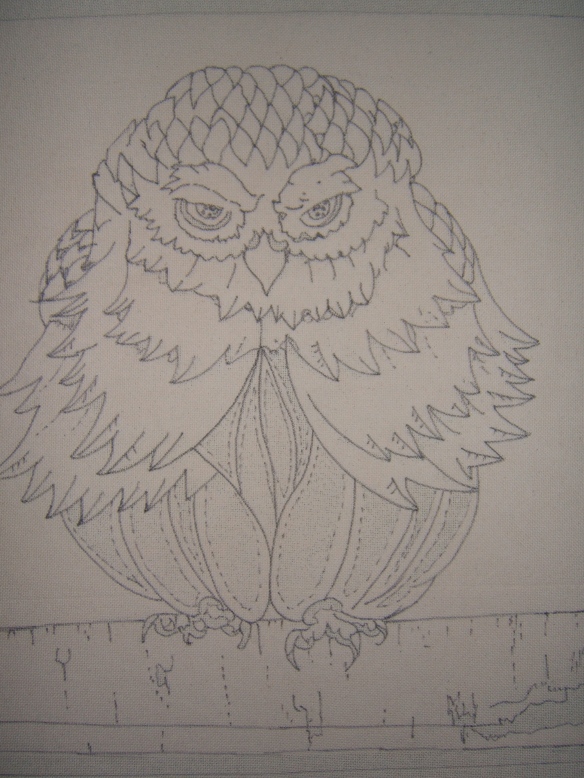 Then I stared at it for a couple of months (while finishing other projects) trying to decide how to translate Mathieu’s “dot work” drawing into hooking.

While still having no idea how I’d proceed, I began outlining in black. I didn’t want it to be a realistic owl, but rather faithful to Mathieu’s drawing.

I experimented with interior colours by over dyeing various wool with three colours….clay, mouse gray, and charcoal.

Then used a much weaker dye bath over natural Dorr to create a mottled off white, and also a  slightly darker version. (they’re not nearly this dark in reality)

The outlining is a #3 cut, and the rest I’m using #4. It just seemed an appropriate cut to fill the small spaces effectively, and create the shading. (although I seldom hook with such a small cut).

Of course, before long I decided I had to try the eyes. I found this grey/blue Pendleton plaid……

….then hooked his bill. Now he has more character.

I’m really having a lot of fun with this as he comes to life. 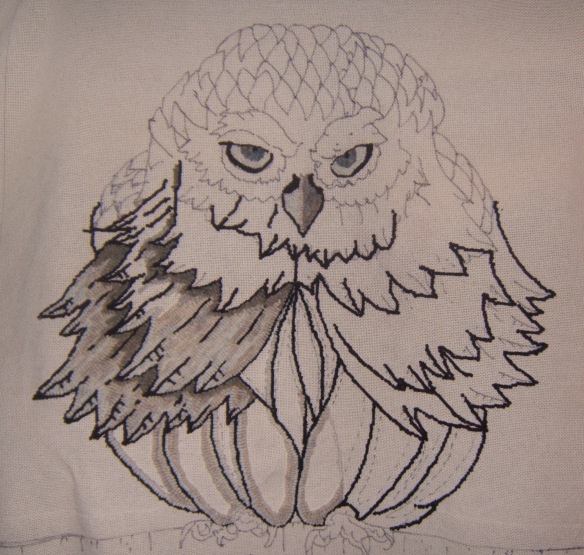 The black outlining is rather mindless, so that’s what I do when I’m hooking with others (mustn’t interfere with chatting you know)…..and the body I work on when I’m alone and can concentrate. To my mind that’s one of the big advantages to rug hooking….being able to jump around.

He looks a little sinister at the moment, but that will change I’m sure when I get colour in his head feathers.

My summer hooking lies ahead in having this fellow come to life.