One of the great joys of growing older is spending time with grandchildren. It is especially treasured by me since all my grandchildren live a great distance away, and seldom have a chance to visit.  On my granddaughter’s last visit, she tried  hooking for the first time. To her surprise she found she had the patience for it, and was looking forward to starting her second venture on this visit. She decided she wanted to hook an elephant pillow for her girlfriend. She wanted something “cute” and quickly found just the image she liked.

After a trip to Staples to have it enlarged, she transferred the pattern to the backing.

Isn’t he cute. I had lots of antique black in my stash, so she began with the outlining. 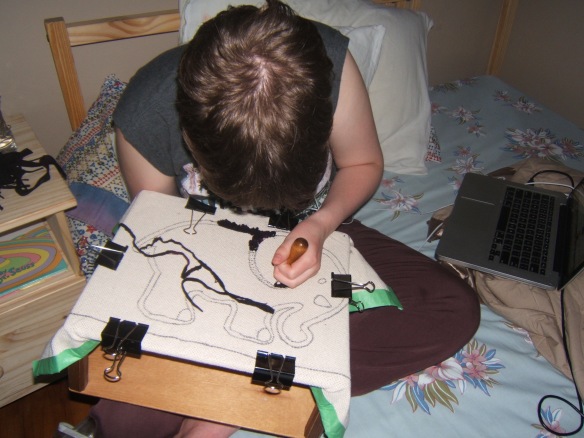 Olivia is left handed, and has a very unique pencil grip. Although at first I encouraged her to  palm the hook, what was comfortable for her was the same unusual way she holds a pencil….with the hook protruding and controlled between her third and fourth fingers. It works just fine for her.

She decided on a whimsical purple elephant, and chose a lovely colour from “Jewel Tones”. I gave guidance from the kitchen table, and on her own, she dyed this lovely mottled wool, using my tried and true method of !/2 of the dye bath in the pot before adding the wool, and the other later spotted over the top. 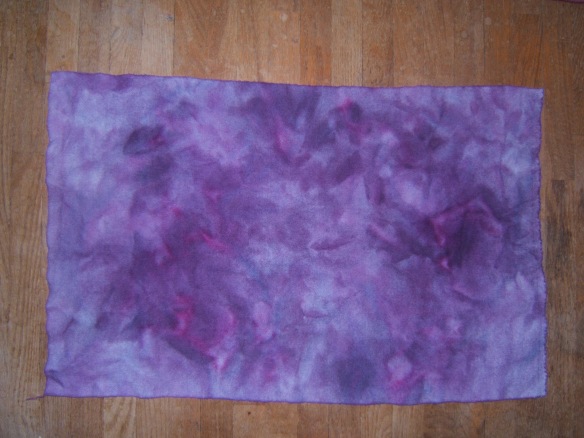 We both thought it was beautiful.

I showed her how to do a squiggle fill….and before I knew it…..

….this delightful fellow emerged. She also dyed the background colour. I forgot to take a photo of that wool, but you can see just one row on the left edge. She chose my favourite “mellow yellow”….golden pear….and she used the same method to dye it as the purple. She’s off now to visit other grandparents, where her grandfather is introducing her to wood carving. She’s having an artistic vacation!

In the meantime, I’ve been pottering away with my grumpy owl, trying to do a bit each day while I watch the Tour de France.

I like how he looks, but I’ll be glad to hook once again with some colour when he’s done. I know I haven’t posted much this summer…but there’s not much excitement in seeing a few more inches of “owl feathers” every few days.