Well I thought it would be a quick little project.   I mean ….how difficult can it be to hook up three 4.5 ” mug rugs. Thank goodness I started several weeks before I needed them, because the glue is just now drying on the edging…and the birthday party is only 3 days away.

So what took so long? The gingerbread  one I did first was straight forward….until I looked for more of the background wool to cut for the edging. NOPE…..not to be found. GONE! I searched for ages. I found every possible shade of beige, tan and brown except that one. So after wasting most of an evening, I finally decided to do the edge in black to match the bottom. It matches the back, but certainly wasn’t my first choice.

I wish now I had done the background in white. At the time, I chose the light tan so that the icing on the gingerbread man wouldn’t be lost, but it doesn’t match the mug as well as I’d like.  (you can see the wet glue a bit, but that will disappear when it dries)

The moose with plaid background was the one that took me the longest. I began by outlining the moose shape with the red, then filling in the body. Then I realized that was the wrong colour, and redid it in  black.

I made one totally false start on the plaid, and ripped that out as well. After a google search I found an example of a hooked plaid on the internet, and was able to figure out how to do it from looking at that……hooking vertical rows and skipping ditches, then horizontal rows between. I figured out a plan on paper, and it went pretty well until I came to the parts where I had to skip over the body of the moose. That took a lot of adjusting, ripping out and rehooking, but I’m finally pleased with the outcome. 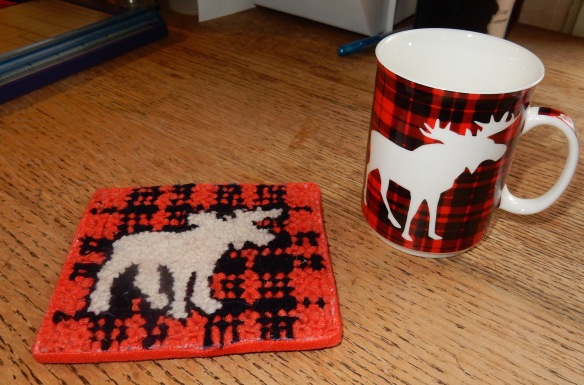 Part way through, I realized that I didn’t have to worry about how to squeeze those ends in on the top……the back is covered, so I could just leave them on the wrong side .(sometimes I’m a little slow to see the obvious!)

I left the holly to the last and didn’t anticipate any problems.  Wrong again. The little cluster I drew was a mess when hooked, (my husband had no idea what it was supposed to be) so out it came, and I started again.

I redrew a totally different version and then just hooked  three of the leaves.

I used left over pieces from a blue green dip dye and some acid yellow green.

…..out came all the lighter sections of blue green, and I added more of the yellow green.

Finally, I’m happy with it.

Next, I’m about to venture into the world of punch needle. Sunshine Rug Hookers are sponsoring a workshop (well 2 workshops actually) in early November and I’m looking forward to trying something quite new (for me). I’ve always admired the little miniature punch needle pieces in particular, and I’m looking to trying it and using some of my large stash of crewel wool  which has been neglected in a box for many years.

Lastly, while I was working on the mug rugs, my trusty camera gave up the ghost, and completely died. I really can’t complain. I had had it for about 10 years, and in this age of planned obsolescence, that’s not bad. So I’m now the proud owner of a brand new one, but I’m still learning how to manipulate all its bells and whistles (note the poor setting choices in the photos of the “in progress” mats). Now to just remember to have it with me all the time…..

So now with my new camera in hand, dreary November (my least favourite month) about to begin, and my nesting instinct kicking in, I’ll endeavour to post here more frequently.

14 thoughts on “Finishing Up”