For me, I like every every project I do to present me with a learning experience and a challenge.   Ultimately if I am successful…(at least in my eyes), I derive a great sense of satisfaction in achieving what I set out to do. 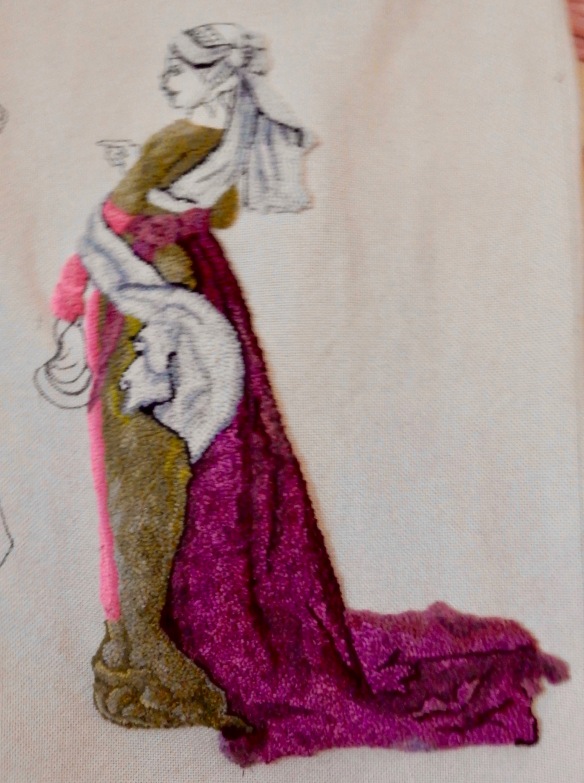 To that end, creating the detailed clothing on the two virgins is a new experience for me, and as usual, some of what I tried , I liked, and some….nope…not at all!  I tried two different approaches on the foolish virgin. For the green portion of the dress, I began with dip dyes (I could have used swatches, but dip dyeing is much easier for me to do). I then cut them into several sections giving me a range from dark to light.  I ripped out that effort since there wasn’t enough variation  to be effective.  I then rehooked it using some much darker green, and a much lighter one (almost yellow) to create the highlights and folds, and was then more pleased with the results.

The extremes I used very sparingly, but they made all the difference.

I tried a totally different colour approach for the fuchsia portion of the gown.

I did a spot dye using  Majic Carpet red violet, and Primary Fusion #12  (which uses Pro Chem magenta, blue, and black). Then I went through my stash and found all the bits and pieces that went with that. I had a good range of values, though not necessarily matching exactly  in hue. The primary colour is the dip dye and I really like the highlights that it creates in the dress.

My pattern is taken from a 1500’s etching, (with no colour) and the next thing I learned, was that all the lines in the etching don’t necessarily translate well when using colour. I started the fuchsia section of the gown by outlining the lines in the etching in a dark value, and soon realized that many of them made no sense to me and looked ridiculous. I eliminated the vast majority, and went mostly by my own idea of where there might be folds and shadows. There is still one line on the floor section of the train that I will remove, and use a bit lighter colour the fill in that area (and I won’t use a straight line).

So with that bit of experience under my belt, I’m ready now to tackle the gown of the wise virgin. I’ve got two colours ready to go….a spot dye using Pro Chem seabreeze and mallard green,

(I  did 3 versions from dark to light), plus a couple of pieces that I had that went with that.  (for some reason the camera bled the green out of the far blue….it actually goes with the rest much better than this photo shows) The second colour is primarily a cantaloupe and mustard spot dye  done over both natural and oatmeal.

I have no idea if this will work, but I’m set to try.

The other thing I’ve learned is that I’m either a lousy photographer, or have a lousy camera when it comes to colour (or maybe both).

Thanks so much for stopping by.

4 thoughts on “Learning Through Doing”